The Sanatorium Reserve is a nationally-significant geothermal landscape on the edge of the Rotorua CBD. The area provides a habitat for endangered birds, threatened long-tailed bats and rare geothermal plant species, as well as being a popular destination for locals and visitors.

He aha e marohitia ana?
What is proposed?

The Sanatorium Reserve land was gifted to the people of Rotorua by Ngāti Whakaue as part of the Fenton Agreement back in 1880. The 77 hectare reserve skirts Lake Rotorua on its northern side, Te Ngae Road to the south, Puarenga Stream to the east, and the Polynesian Spa to the west.

The Sanatorium, Sulphur Point and geothermal habitats on the eastern side of the Puarenga Stream comprise the fourth largest area of geothermal habitat in New Zealand and are considered to be nationally-significant.

The site provides Rotorua with a unique environmental restoration opportunity and visitor destination within the heart of the city.
The project has two main stages.

Ecological restoration
An ecological management plan for the reserve has been developed by Rotorua-based Wildland Consultants, to provide a guide to restoration of the site.

The ecological restoration objectives are:
• Vegetation at the site is returned to its unique geothermal composition, free of weeds.
• Birds and other indigenous fauna thrive at the site, and pest animal numbers are low.
• The site is safe for all users.
• A unique visitor experience is provided through both the ecological restoration and other initiatives that enhance the visitor experience.
Ongoing restoration work for the project includes pest animal control, pest plant and tree removal (predominantly arrow bamboo) and ongoing ecological monitoring. 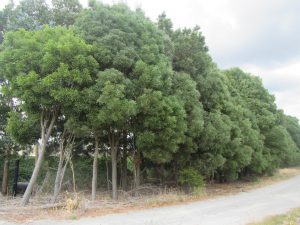 Infrastructure enhancement
The second stage of the project will include re-vegetation and re-purposing of the surrounding land and buildings in the centre of the reserve; development of appropriate infrastructure such as viewing platforms; cultural/ecological interpretation; and collaboration to fit in with the upgrade of the wastewater treatment plant.
Work in the reserve commenced in September 2018.

He aha te tino take o te hinonga?
Why is this project important?

The Sanatorium, Sulphur Point and the geothermal habitats on the eastern side of the Puarenga Stream comprise the fourth largest area of geothermal habitat in New Zealand and are considered to be nationally-significant. The area provides a habitat for endangered birds, threatened long-tailed bats and rare geothermal plant species, and is a popular destination for locals and visitors. The site provides Rotorua with a unique environmental restoration opportunity and visitor destination within the heart of our city.

Nā wai te hinonga i whakarite?
Who has been part of the project development?

A Council project team has been set up, with Richard Dahlenburg as Project Manager. Wildland Consultants Limited have been contracted to deliver the first three years of the restoration work. A stakeholder group of iwi and conservation partners and reserve users has been guiding the planning for the Reserve.

I ahu mai te pūtea i hea?
How is this being funded?

Funding for the restoration has been allocated in the Rotorua Lakes Council 2018-2028 Long-Term Plan. In addition, $80,000 has been secured from the Lotteries Environment Fund and Pub Charities for work in 2018-2020. Further funding is being sought to complete the enhancement work.

19 September 2018 – Geothermal wonder to be restored

What work has been done so far?

Weed control
Weed control operations are going well with significant amounts of bamboo already cleared by Wildland Consultants Limited. The arrow bamboo is removed by a remote-controlled mulcher and sprayed to discourage grow-back. Wildlands have continued this process during the three years of this project which has resulted in a significant reduction in pest plant species. Removal of other plant pest species such as eucalyptus, wattles and pines has also cleared a significant amount of land to enable native growth.

Reserve maintenance
Council is working in collaboration with other organisations to upgrade various parts of the reserve. Department of Conservation have installed geothermal fences and Waka Kotahi NZ Transport Agency will be upgrading the Puarenga Bridge as part of the Eastern Corridor Stage 1 project along Te Ngae Road.

Pest animal control
Wildlands have been working to monitor and trap pest animals such as rats. To assist with this work Wildlands has been engaging school students as part of their environmental learning programmes.


What is happening with the public rubbish clean ups?

Public clean ups are a great way to get the community involved with this project, encourage a sense community ownership of public spaces and reduce instances of littering. If you would like to organise a community clean up for Sanatorium Reserve get in touch and we can discuss what support Council can offer – email richard.dahlenburg@rotorualc.nz

During Conservation Week in September 2018 Sudima Hotel organised a clean-up of the reserve. The event attracted more than 60 people and 360kgs of rubbish was collected in two hours. Volunteers included children from Rotorua Primary School, students from Toi Ohomai and staff from Chris Smith Glass. Throughout the restoration project Council will be looking to get the community involved and this may include more clean-up projects.

Top
Looking for Something?